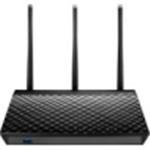 dual-band connectivity for lag-free entertainment delivering 2.4ghz and 5ghz concurrent bands at up to 450mbps and 1300mbps, respectively, the rt-ac66u b1 has a total speed of up to 1750mbps. you can perform basic tasks like web browsing and file downloading on the 2.4ghz band, while simultaneously allowing multiple devices to stream in hd or support online gaming and other demanding applications smoothly on the clearer 5ghz band.

do more at once with dual-core processors inside the asus rt-ac66u b1 features a dual-core processor that eliminates the performance drops that plague other routers. so even on the busiest home networks, hd video streaming is smooth, the latency low for online gaming and voip calls, and file downloads are uninterrupted. entertainment everywhere, on every device exclusive ultra-sensitive receivers give improved mid- and long-range wi-fi signal, with high-powered amplifiers and airadar beamforming to deliver unrivaled coverage that's fast, reliable and stable for all your connected devices, from pcs and mobile devices to game consoles and beyond.

asus router app
control your network anywhere in your increasingly mobile-enabled life, having control over your network via an app is more important than ever. the new asus router app is built from the ground-up to be both intuitive and robust, allowing you to setup your router, manage network traffic, diagnose connection issues and even update firmware, all without needing to boot up a pc. ultimate usb speed and versatility usb 3.0 features data transfers up ten times faster than usb 2.0. two usb ports make the rt-ac66u b1 perfect for file, multimedia, and 3g/4g sharing, while asus aidisk offers remote access and quick content streaming. where other routers have their usb ports sandwiched next to one another, both rt-ac66u b1 usb ports are evenly spaced for easy access to either at all times.

No options for this product
Every effort has been made to ensure the accuracy of all information contained herein. e-nitiative shall not be liable for any changes resulting in wrong product description, tax code and/or price. The shown information (specifications, prices, taxes) should be considered as an indication and can be changed at any moment and without any prior notice.