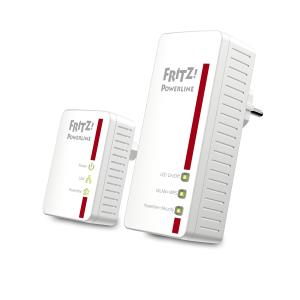 Internet at lightning speed everywhere with powerline
Any outlet can be turned into a secure, fast network connection in no time at all. The FRITZ!Powerline 540E WLAN Set extends the home network using the home's own wiring at rates of up to 500 Mbit/s. The smaller FRITZ!Powerline 510E is the best device for connecting the router, for instance a FRITZ!Box, with the powerline network. On the other end FRITZ!Powerline 540E's two Fast Ethernet ports integrates other network devices like PCs, printer, TV, Blu-ray player, sound system and game consoles in your home network, with the latest chipset technology providing for particularly energy efficient operation.

Secure wireless networking at up to 300 Mbit/s and greater range
FRITZ!Powerline 540E has its own independent wireless access point. This makes it simple to expand the wireless network of the FRITZ!Box to make it available even in rooms located some distance away. With maximum security through WPA2 encryption, simple integration of wireless devices via WPS (Wi-Fi Protected Setup) and data transfer rates of up to 300 Mbit/s and MIMO (more range for the data rates required), FRITZ!Powerline 540E provides the highest level of convenience and flexibility for wireless surfing and home networking.

Starts operating right away
One of the outstanding features of the FRITZ!Powerline 540E WLAN Set is the encryption set upon delivery, which allows safe operation to be launched immediately. The two powerline devices are simply connected with the devices to be networked by LAN cable and then inserted in the outlets where the devices are plugged in. Pairing configured ex works means that the powerline devices find each other automatically, establishing a connection protected with 128-bit AES encryption (plug & play). More powerline devices can be added to the secure FRITZ!Powerline network at the press of a button.

AVM FRITZ!Powerline 540E WLAN Set at a glance:
- Wireless Internet access at every power outlet in the household
- Create a new powerline network or expand an existing one
- Fully developed powerline technology with data rates of up to 500 Mbit/s (gross)
- For fast Internet access, transmission of music, photos and videos, gaming and VoIP
- Range of several hundred meters on the home's electrical wiring
- Linkup for PC, TV, notebook, smartphone, tablet and much more
- Maximum security in the power network with AES 128-bit encryption for data transfer
- Compatible with with IEEE P1901 and all common 500 Mbit/s and 200 Mbit/s powerline adapters
- Fast Ethernet (100 Mbit/s) for networking PCs, printer, TV, sound system, Blu-Ray player, game consoles, and more
- Browser-based user interface for control of the whole range of functions and for FRITZ!OS updates